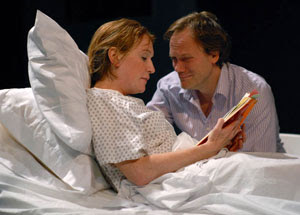 Photo/Louis Changchien
Look, as long as you're fine with surface-level laughs, The Bereaved satisfies. But is that all that Thomas Bradshaw's after? I mean, it's one thing to shock us into seeing slavery and alcoholism--two things we've all got pretty strong opinions about--in a new light. But we already know that American families are increasingly callous and disconnected. What's the point of Bradshaw's 80-minute bit of shocksploitation, save to let May Adrales show off her lack of inhibition as a director? Without giving away any surprises (since that's all the show has up its sleeve), just know that things quickly elevate from Michael (Andrew Garman) and Carol (McKenna Kerrigan) arguing over chores and their son's semen soiled underwear; Carol has an adverse reaction to some of Michael's casual cocaine, and their son, Teddy (Vincent Madero) is soon playing Nintendo DS by her deathbed, barely listening as she advises Michael to marry her best friend, Katy (KK Moggie), so that they can continue to support their upper-middle-class lifestyle. (And Teddy hasn't even gotten his schoolmate Melissa [Jenny Seastone Stern] pregnant yet!) The speedy delivery of plot- and comic-heavy scenes is somewhat refreshing--who needs subtext?--and the lack of hidden facets doesn't diminish the surprising effect of seeing the characters actually doing what they're talking about (like a rape scene in blackface). It's just a shame there's nothing to actually mourn in the play, let alone to feel the smallest shred of sorrow for.
Posted by Aaron Riccio at 11:51 PM