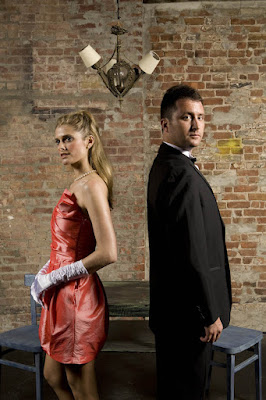 Photo/Christine Han
Given the Greek names, trick endings of a blood-thirsty O. Henry, and the lack of anything overtly religious, it's hard to believe that when Neil LaBute's bash premiered in 1999, it had the subtitle "latter-day plays." But whatever; ten years later, Eastcheap Rep attempts to at least keep it present, with director Robert Knopf forgoing a stage in favor of a more intimate coffee-house set-up, an attempt to make the creepy casualness of LaBute's three one-acts even more apparent. For the first two pieces, "Medea Redux" and "Iphigenia in Orem," the acting holds up. In the first, Chelsea Lagos pins the audience to their seats with her eye-contact, ensuring that we're on the same page as her character--a 13-year-old having her teacher's baby--while at the same time reminding us that we can't possibly understand. In the second, Luke Rosen's focused nonchalance as a well-intentioned middle-manager serves him well, especially as he explains his calculated choice to let his infant daughter smother. However, the final piece, "A Gaggle of Saints," needs to abandon the naturalist staging, because while the engaged Sue and John may be telling their own sides of the same story, it's awkward to have them one standing awkwardly as the other explains the truth of what happened that night in Central Park. (Worse, Rosen's disaffected demeanor now makes his character one-dimensional and unbelievable.) This revival of bash isn't anything to rush out and celebrate, but if you drop by a 10:30 weekend performance, you do get a glass of Prosecco to help wash down the dirty feelings LaBute so expertly evokes.