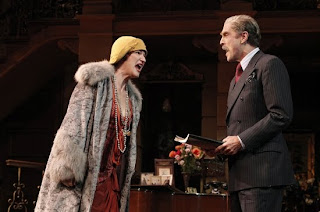 The scenic aspect of Manhattan Theatre Club's revival of The Royal Family is stunning--John Lee Beatty's set received rousing applause the moment the curtain was raised--but there's not much else happening on the stage of the Friedman to recommend devoting nearly three hours to this poorly-performed bagatelle. The play itself is quite funny and biting, but you'd never know that from watching Doug Hughes' largely miscast cast struggle through three acts of flubs, dropped lines, and seemingly iron-clad jokes landing with a resounding thud. The biggest disappointment is Jan Maxwell, who seemed perfectly cast as devoted actress Julie Cavendish, a woman who has given everything up to follow her devotion to the stage. Maxwell cuts a striking figure in Catherine Zuber's lush costumes, but delivers her lines as much enthusiasm as ordering a sandwich at the deli. Even Julie's magnificent second-act monologue couldn't rouse any emotion for her. Sadly, Rosemary Harris fared no better--she appeared lost and confused, when she was audible. Of the principles, only John Glover's Herbert Dean--a vainglorious old-timer who cannot accept that he's past his prime--hit all the right notes and reminded me how sharp and satisfying well-drawn satire can be. Still, he's not enough to recommend investing any time in this brightly colored but ultimately empty pastiche.
Posted by Cameron Kelsall at 10:11 AM