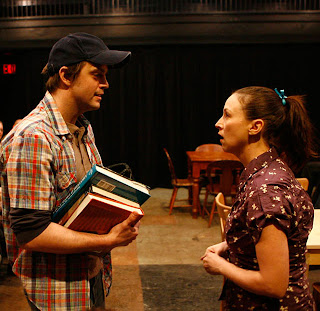 Having always believed that Thornton Wilder's Our Town is one of the few irreproachable works in the American dramatic canon, and always lamenting the fact that I'd never seen a truly terrific production of it, I attended David Cromer's ridiculously acclaimed production at the Barrow Street Theatre with something greater than the highest hopes that I, too, would be mesmerized by it. And, well...I wasn't. The magic of this particular play is two-fold: the language is beautifully simple but also theatrical, and the play itself, which premiered in 1938, is unapologetically progressive, meta-theatrical before the term existed. That's the idea that Cromer seems to be pursuing with his deconstruction here, but I couldn't help but feeling that three-quarters of this production felt no different than any community theatre mounting of the play. It isn't until the coup-de-theatre in Act Three--which I won't reveal, but which happens to be the most un-Wilderian aspect of the production--that the audience somewhat understands the feeling Cromer was trying to achieve. It doesn't help that Emily Webb (Jennifer Grace, dreadful) speaks her lines as if she were a mental patient, or that her suitor, George Gibbs (James McMenamin) acts like he's in the slow class at Grovers Corners High. Thankfully, two pitch-perfect performances stand out: Jason Butler Harner, the first Stage Manager I've seen who is neither glib nor overly earnest; and Lori Myers, simply heartbreaking as Mrs. Gibbs.
Posted by Cameron Kelsall at 8:14 AM

Best production I’ve ever seen (of four) was the Hal Holbrook movie version from 1977.

The coup-de-theatre was delightful, but surprisingly it was mentioned in few of the other reviews.

I've not seen the Holbrook production, although I've always wanted to. I can imagine he would be a great Stage Manager. I've seen the Gregory Mosher production from Lincoln Center, which is visually attractive and features two incredible performances (Stoltz and Miller) but ultimately leaves me cold.

Cameron - I completely disagree, and that's an understatement! (By the way, say hi at TOSCA on Thursday, willya?)