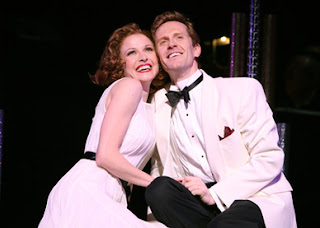 I was delighted by the opening number, a witty ditty that depicts the Astor and Rockefeller-type Manhattan bluebloods so pinched by the Depression that they've taken to dining and schmoozing at the Automat. By the second number, a dynamite little "forget your troubles" tapdance that showcased wonderful Jeffry Denman and Meredith Patterson all but gliding on air, I was almost giddy with pleasure. I fell positively and officially in love with this show by the third number, a mock-patriotic spoof that promotes thrift in tough times (Why give three cheers when two will do?/Let's cheer the red and the white but not the blue!) Where in the world has this spiffy, clever, tuneful little Irving Berlin backstage musical been hiding? And how has Encores! managed to do it so wonderfully right, from the flawless casting to the spare but stylishly evocative sets to the pulse-quickening orchestrations? Judy Kaye, Walter Bobbie, Mylinda Hull, Eddie Korbich, Felicia Finley, and so on: there isn't a bum performance in the bunch, and every performer is on the same page of era-specificity and accuracy. If the stated mission of Encores! - to mount concert productions of little-known musicals which respect the material - is the kind of thing you like, then Face The Music is the kind of thing you will love. The time machine has coughed up a diamond.
Posted by Patrick Lee at 12:45 AM

Aww... Now I'm even angrier for missing it. Damn my roommate for moving out and for costing me a week of no theater! Damn!