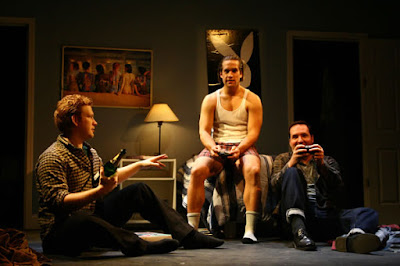 I have no idea how the three one-acts in Committed are supposed to connect with each other. Every play is about relationships, but then again . . . every play is about relationships. That's what people go to the theater for. Living Image Arts (LIA) has missed their mark with this production: it's nice to foster diverse and distinctive voices, it's no good if they've got nothing to say (that is, if it's not "compelling and innovative" or "living and relevant"). To be fair, I don't see how you can do either of those quotable things in a stylized comedy like "Off the Cuff" or how you make something as cute and bland as "Men Are Pigs" anything more than the short and sweet joke it is. "Boxes," which is a sharp, smart, poignant piece by Robert Askins, is put off by a lulling monotony between the two actors (who are all brogue and no brash), so even the success of the night comes with a grain of salt. But hey, writing theater's hard: you have to be committed, in both meanings of the word, to really make it work.
Posted by Aaron Riccio at 11:14 PM