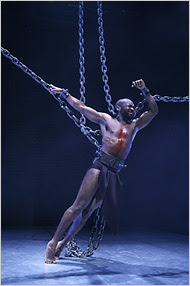 Not only wasn't I blown away by this show, but I wasn't blown away by David Oyelowo's Prometheus either. I found the chains to be more impressive than him (to some degree the point, since they hold him firm), but honestly, beyond that imposing effect, the play has little weight, substance, or steel. It doesn't help, either, that the show is plagued with repetitious rhetoric: whether it's a Greek chorus of birds come to visit, or the maddened Io, or even the friendly Oceanus, Prometheus speaks the same to them all, with very little variation in his tactics (which got him chained to a rock in the first place). Stubborness may be an honest appraisal of Prometheus, but it's hard to watch for 90 minutes. I don't fault James Kerr's direction or translation of the show, but he ought to have noticed that the script was a little lacking: it's notable that the best moments of Prometheus Bound come when there is no text, simply the silent struggle between man and chain. Fiddle with the lighting all you want, add wave-crashing music in the background, and that's still going to be the most important part of the play: what the Greeks lack in character, they make up for in suffering.