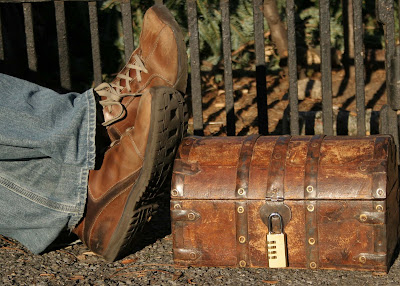 Gilligan's got nothing on this three-hour tour. Accomplice: New York destroys the fourth wall as it makes Manhattan the stage, those crazy people on the street its players, and you -- well, you're the starring role. No pressure, it's not a competition, though there are some Amazing Race-type detours and some slight mental ambidexterity is required. But at the same time, you're not alone: you'll most likely be traveling with seven new accomplices as you learn that theater has the ability to not just move you (emotionally), but to quite literally take you for a ride the old fashioned way. Crime has never paid off so well before, and considering that your ticket comes with a few drinks and a nice antipasto along the way, not to mention a newfound respect for the south side of Manhattan and the improvisational talents of its actors . . . it's a price worth paying.

I guess you'll want to place a twitter button to your website. Just bookmarked the article, but I must make it manually. Simply my suggestion.

Remarkable writing. I’ve been reading online articles for quite long time but to tell the truth I never got something really interesting to read out similar to this one.And yes i have tweeted your site showshowdown.blogspot.com

Anonymous said...
This comment has been removed by a blog administrator.
8:26 AM