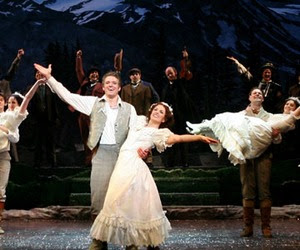 ***1/2
Papermill Playhouse
So my plan was to do the lotto for A Chorus Line and if that didn't work out then I already had tix for Boys Just Wanna Have Fun at Actor's Playhouse. But quite randomly at the last minute, as often is the case when one is a ticket-sniffing truffle-hog, I found myself on a train to Milburn, NJ to check out Seven Brides For Seven Brothers. Though I feel an ideal production of this inherently erotic musical (young, handsome, horny mountain men woo snowbound girls they've kidnapped (hot!)) would be a lot more sexy and lusty than presented here, a hokey naive charm abounded and kept a stupid smile on my face from start to finish. Comic bits were executed with all the subtlety of a children's show but this over-the-top energy fueled the insanely energetic songs and dances. With all these movies turned musicals with musical numbers jammed into scenes where they often don't fit, it was nice to see a show where the book relied on the songs and dances so joyously presented here. (YES, 7 for 7 was a movie first too but at least was a musical in its original cinematic incarnation). I left humming a number of catchy tunes and was armed with catalogue of reasons as to why I should donate money to the Papermill Playhouse fund offered up to us by pre AND post curtain speeches- the best reason was what happened in between them.
Posted by David Bell at 11:34 PM

i think i'm going to make my way out to nj for this...i adored the movie growing up.