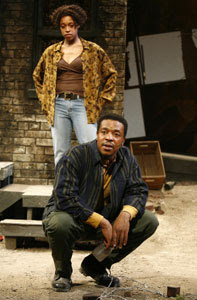 I have to say it straight out: despite the obvious artistry of August Wilson's dialogue, the original 2001 Broadway production left me cold and unmoved. King Deadly I dubbed it. But what was broad in that production is now intimate and affecting for the revival at the Signature; what was stilted and false now flows like jagged, vital poetry, the kind that Wilson writes that turns monologues into theatrical arias. Could this play have receieved more care and could it have been better performed than it is here? I doubt it.
Posted by Patrick Lee at 12:59 AM