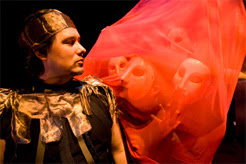 Ted Hughes' adaptation of Euripides' Alcestis, currently being New York-premiered by Handcart Ensemble, is easily accessible even for audiences unacquainted with the genre of Greek tragedy. Hughes' version, published posthumously in 1999, tends to modern-day language and emphasizes the hopefulness in the ancient story, while still rendering its darkness of seemingly inconsolable grief. Handcart's solid, thoughtful production succeeds far more often than it fails: there are simple and effective directorial choices, such as using a hanging panel of sheer red fabric to depict the Underworld, and having the chorus create a dramatic soundscape (that functions something like underscoring) when appropriate. Regretably, the ensemble is not entirely of a piece, with some of the actors lacking the needed weight. One scene which should be especially grave - the confrontation between King Admetos and his father, who refused to die in his son's place to satisfy the gods - completely misses the mark but I'm mystified as to why. The minor lapse is easily forgotten by the time we reach the play's emotionally powerful final scenes, with Ron Bopst rendering the King's sorrow, honor, and finally joy with striking simplicity, and David D'Agostini making a strong, memorably warm Heracles.
Posted by Patrick Lee at 12:45 AM

Are you looking for the best place to [url=http://sonyps4gaming.com]buy cheap viagra[/url] and other black market drugs around? We have a discreet and professional pharmacy that does not require a prescription. So come to us to buy cheap viagra and never worry about it again.

Anonymous said...
This comment has been removed by a blog administrator.
2:16 AM