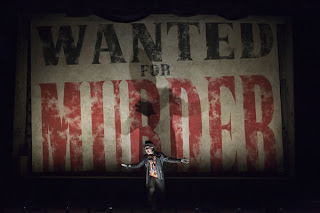 This highly stylized production, a new adaptation of the Dickens novel, presents the story with menacing penny-dreadul imagery and Brechtian theatrical devices. Its vision is consistent and vivid and the stagecraft is impressive; you haven't seen an Oliver Twist like this before, and yet it's often more remarkably attuned to the authoral voice in the novel than any other version I've seen on stage. However, it is slow-going for the first half of the first act - with everyone forced into heightened posturing, it gets a little ponderous watching the initial parade of gleefully awful grotesques, and some of the devices (such as having the ensemble address the audience in grim musical speak-song) take some getting used to. Once little orphan Oliver is curled up at Fagin's den of thievery and the plot is relentlessly in motion, the show starts to have urgency and feeling and its distinctive style begins to seem shrewd, a way to wring more out of Oliver Twist than just melodrama.

Also blogged by: [David]
Posted by Patrick Lee at 7:00 PM