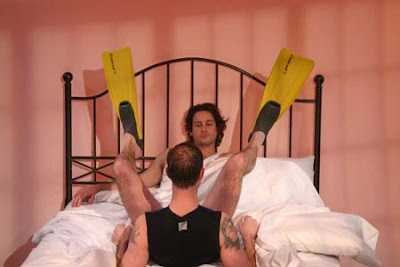 Photo/Brian Michael Thomas
It feels like Nick Flint is sleepwalking his way through Bed, a well-written, small-scale tragicomedy by Brendan Cowell. The five intimate others Nick encounters in his cyclical bedroom scenes are all there, emotionally willing and ready, but Flint's passion is caught up in the facade that his character, Phil, tries so hard to maintain. Something of his character's arrogance must be backing him up, or perhaps he's afraid of such unbridled (and unexplained) bitterness; whatever the reason, the play is too short for the main character to give anything less than everything, and as a result, after fifty minutes of warm-up, the play ends before giving any real resolution to this man's life.