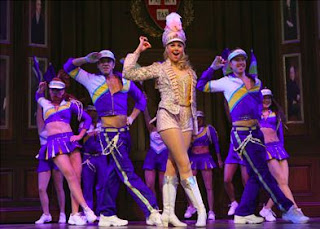 The musical version of Legally Blonde is like one of those top-heavy cupcakes at Junior's: half a pound of frosting on three ounces of cake. Unlike the movie (which I found barely tolerable) it should come with a health warning: unfit for consumption by heterosexual males. This girliest tourist attraction ever to open on Broadway (if you don't count the show at American Girl Place) peaks with its opening number - there isn't a single decent song in the score after that - but the show is so relentlessly energetic and skillfully staged that it never lags, and that (and its girl-power message) is enough to make it a smash with the tween girls who've outgrown the Disney shows and are so over Wicked by now. For the rest of us, the supporting cast is an embarrassment of riches: Christian Borle, Kate Shindle, Michael Rupert, Orfeh, Andy Karl, and - stealing all focus whenever she's on stage as one-third of the main character's Greek Chorus - the superfabulous Leslie Kritzer.
Posted by Patrick Lee at 11:00 PM