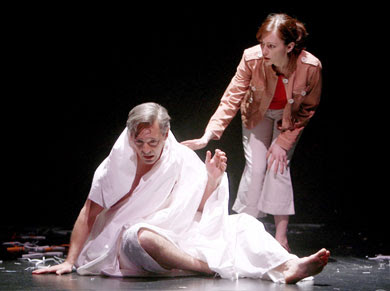 Here we go, folks! Aaron's first unmissable show of 2007. I raved about Lear deBessonet's work last year in Bone Portraits, and I'm more than happy to do it again here. She's a theatrical DJ, sampling texts and themes from all over the place to make them stronger individually and overwhelming together (and that's no small feat when you're borrowing from Chuck Mee, Henrik Ibsen, and Joan of Arc). Hyperreligious delusions make for good theater, especially when you're a director who is unafraid of putting your actors "stage up" and "stage down," and when you've got a flair for the malleability of string, paper, and people. Wonderful lighting, beautiful choreography, and above all: passion. It's not a traditional plot, though there is a central story, but it evokes one heck of a powerful ambiance, and as a writer, mood makes the story, any day of the week.

Did we see the same show? The show I saw was a pretentious, overwrought and downright unwatchable, a show so bad that I decided to be nice and not review it. I'm glad you liked it, but...wow.

Wow, I don't know. Usually we're on the same page . . . I'll be posting an official review explaining specifically what did it for me when the show opens on Monday. I can see where pretentious *MIGHT* come up, but overwrought and unwatchable? I was stricken by the beauty of how it all flowed from moment to moment, idea to idea.

Then again, it should be no mystery to my readers that I'm more aesthetic than substantial, so maybe that has something to do with it?

Then again, it should be no mystery to my readers that I'm more aesthetic than substantial, so maybe that has something to do with it?

That could explain it. Some of the choreography was visually stunning, I will say, but emotionally it left me cold. I felt like deBossenet didn't quite know what she wanted to do, which led to the disjointedness of the scenes. Some of her ideas were great--paralleling Joan of Arc's interrogation with John Salvi's, especially--but I found the execution poor and the acting sophomoric.

I look forward to your full review. Even when we don't agree (which, as you said, isn't often), they're always a treat. :)