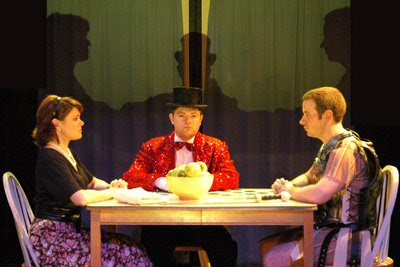 Over-the-top satire such as Suburban Peepshow is more about form than substance, so it's okay to have cross-dressing ninjas and it's fine that the actors break character to complain to the playwright about their "part" in the script. On the whole, the show is lively underground theater, and the only real issue with James Comtois's play is that it doesn't go even further in breaking down both the traditional family and the theater's common depiction of them. The jiggling dance of "Chubby Guy" (Comtois himself) really is the image that sticks with us the most, and the banal observations ("You know what was a good movie? Major League. Yeah. That was a good movie.") make for all-too-familiar small talk. Brilliant? No. Entertaining? Yes.