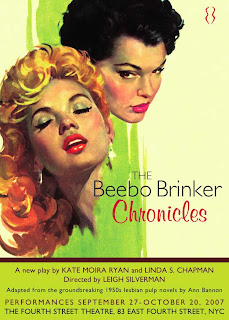 How is it that the already well-tackled issue of coming to terms with one's own sexuality can appear so relevant and fresh? The magic may very well lie in the artful tone established by playwrights Kate Moira Ryan and Linda S. Chapman and director Leigh Silverman in this stage adaptation of one in a series of pulp novels from the fifties about closeted lesbians escaping to New York City. The most obvious and easiest choice would be to camp it up old school. Yes, there is a great deal of humor derived from the rat-a-tat fifties-style delivery and soap operatic heights this production achieves but above and beyond there is a great deal of respect for these lost ladies looking for a comfortable fit. Set mostly in the West Village, a pre-Stonewall atmosphere of underground secrecy is well established as our ladies lurking in the dark corners of smoky bars cruise one another. It reminded me of how scared shitless I was the first time I snuck into a gay bar (Heaven. Houston, Tx. 1991). Led by the gorgeous Marin Ireland and the unmatchable David Greenspan, the cast is just as gourmet as the direction. I just got an email announcing "BEEBO BRINKER sells out run; off-Broadway next?" Does it belong off-Broadway? HELL YES!
Posted by David Bell at 8:10 PM

Just FYI- the show reopened Off-Broadway... i just saw it (again) and it's still fabulous!!! just wanted to share the love. if you haven't seen it yet, check it out!