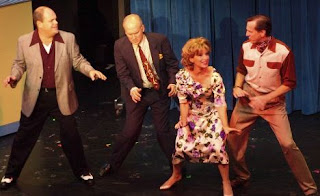 This (NYMF) musical mostly takes place behind the scenes of a television variety show before and during the Red Scare in the McCarthy era '50's: the close friends who work on the program spend the jovial first act laughing off the threat, and the far more serious second act giving (and reeling from) their testimonies at the HUAC hearings. It's a dramatically sound idea for a musical but this one (despite an excellent cast) has less punch than it could: it loses coherence (not to mention a moral center) when the tv star shuns one friend for turning traitor and then encourages another friend to name names. The show is further bogged down by too many musical numbers: if there were half a dozen less, the remaining ones would count for a lot more.
Posted by Patrick Lee at 8:00 PM