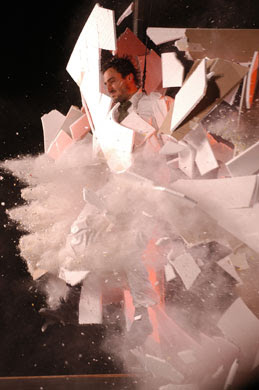 Photo/Fuerzabruta Press
I went to Fuerzabruta expecting to be titillated, amazed, and yes, frightened: brute force, when exercised properly, does all that. Unfortunately, while the show (by Diqui James, a co-founder of De La Guarda) is wildly inventive, it's pretty tame, more a vivid expo (it's even set in a cavernous space, amidst a self-made mob of people) than a finished product. There are moments that will take your breath away, as when what is essentially an gigantic adult Slip 'n' Slide is lowered to just inches from the audience's heads, leaving them to gently brush against its playful dryads. Or when a giant kite with rock-climbing footholds is spun around violently by the fearless stagehands, making the two performers pinned to it seem trapped in a tornado. Or the appeal of watching two dancers cartwheel vertically across a shimmering plastic wall (which assumes both that you find that appealing and that you haven't seen that trick before). These events are loosely tied together by a lot of screaming, dancing, and raving, but these moments grow repetitious and far too forced and artificial. Nothing develops naturally because there isn't actually a story to tell: instead, there's just an increasingly desperate attempt to make a mountain out of a molehill (a really, really technically impressive molehill). While watching our nameless hero run yet again on a giant treadmill rolling its way into the middle of the audience, I found myself paying more attention to the young man next to me who, wide-eyed and gripping his girlfriend for balance, was quite obviously on something far more potent than I. For all that there were high powered fans spinning in my direction, I was far from blown away by anything other than the engaging use of the crowd itself to make a variety of pictures on the stage.
Posted by Aaron Riccio at 10:06 PM