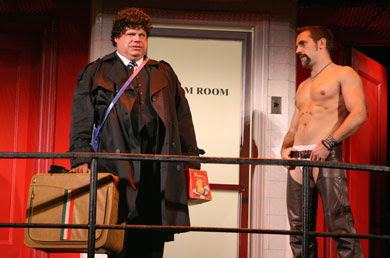 There's nothing momentous about The Ritz; the closest Terrance McNally's script approaches to serious issues is when Gaetano Proclo (Kevin Chamberlin) tells Chris (Brooks Ashmanskas, delightfully spry, and as swishy in his movements as his floral robes), that gays aren't normal. He doesn't say it exactly like that, but his accidental outburst is clear: American "tolerance" is more ignorance than acceptance. However, The Ritz is a farce (one already stripped of the pallor of AIDS), so Gaetano apologizes and befriends Chris. He's just a straight man (literally) in this comedy hiding in a gay Manhattan bathhouse to escape his murderous brother-in-law, Carmine Vespucci (Lenny Venito, a real ham). And what a place: on Scott Pask's three-tiered birthday cake of a set, there's always some sort of icing going on, be it that of the chubby chasing Claude Perkins (Patrick Kerr, who plays the part as creepily as the character's name), or that of the go-go goer, Googie Gomez. (Rosie Perez plays the part well, enthusiastically violent in both her intentionally awful singing and clumsy seductions, but she's just inaudible or unintelligible half the time.) Joe Mantello does a tremendous job of keeping a lot of half-naked men in action (Take Me Out had to have helped), and the only irritating part of the show remains the role of Brick: Terrence Riordan doesn't look intimidating enough for that Mickey Mouse voice to be funny. Luckily, Chamberlin grounds the whole show in a wide-eyed glaze of stupor, terror, and (at times) curious amusement: he's the row of neon bulbs in "The Ritz" that keeps it from being "The Pitz."