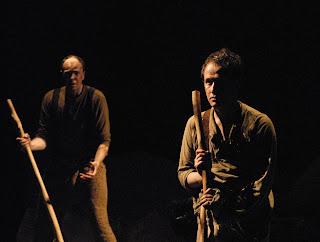 In a dry backward wasteland we meet a father and son who, like every other human being in their world, spend every hour of every day pounding the Earth with sticks. This should serve as a forewarning to the audience: the play has as much subtlety and variation as that constant monotonous stick-jabbing. The son, known only as Lad, pops an erection through his pants in the first scene, which his Mom, known only as Ma, points at and condemns as a sign of the devil. We're not talking about mere repression here, but full blown ignorance: she thinks it's a deformity and she doesn't know where babies come from. Dad, known only as Pa, is only marginally more evolved, suggesting the boy deal with his manhood by heading off to the woods to find a good heifer. There are plenty of signs, such as the staging of Ma's periodic tip-over-and-convulse seizures, that this is meant to be funny. It isn't, but even if it were it would be the lowest kind of entertainment: we're invited to snicker with superiority at the ignorance of the hillbilly-variant characters. And then it's essentially eighty minutes more of the same.