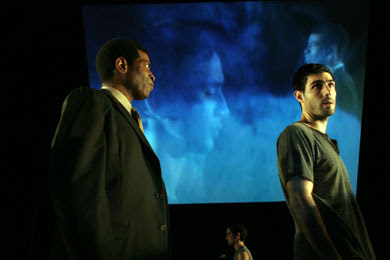 I loawethed Philoktetes, which is to say that John Jesurun's production, premiering at Soho Rep 14 years after it was written, sent me into a simultaneous spasm of awe and loathing. Awe because Jesurun simply writes engaging poetry: seething rants of verse-cum-curse that come in waves of a playful prosody that sustains long thoughts in short sentences bedazzled by common patois and modern jargon ("His head hit a bullet. Habeus corpus, a talking corpse.") Loathing because Jesurun's fanciful production seems as lost at sea as the roundabout, nothing-for-granted script: his twin screens project images above the center of the stage and on the floor itself, but this eerie superimposition of natural disasters (cyclones, thunderstorms) or calm visual "white noise" (rain-flecked water) doesn't connect with the rambling text. The quiet restraint that the actors achieve, flawlessly expressing such troubled thoughts even while tied to carefully choreographed movements (or stillnesses) on a flickering set, is a credit to them, particularly Louis Cancelmi (as Philoktetes). But the ultimate dissonance of each scene begs for this show to be explored at one's own leisure, not subjected to in this dizzying experience.