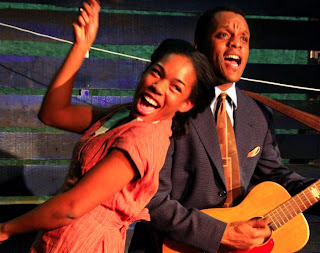 We're in the dirt-poor backwaters of Memphis in the 1930's for this vibrantly written, instantly absorbing tale of a desperate young woman who casts a spell on her lover to keep him from straying. Whether or not more good than bad comes from that is ultimately up to us to decide. The four character play, written by a sensationally talented 26 year old playwright named Katori Hall, has a lively narrative and colorful, crisp (and often coarse) dialogue that practically sings when it's spoken: when each of the lovers actually sings the blues (their original songs are also by the playwright) it feels like the natural progression of what we've been hearing. As a slice-of-life drama, the play is superbly detailed and convincing: I got immediately caught up in the world of superstitions and beliefs that it depicts and (also thanks to a flawless cast) in each of the characters. I have to admit that I found the play's too-tidy epilogue dissatisfying, but that is the only complaint I can come up with for what is otherwise a transporting and highly engaging play. Recommended.
Posted by Patrick Lee at 8:30 PM