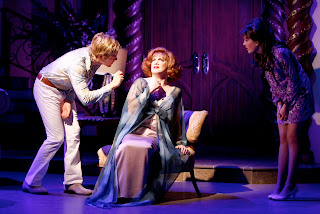 Charles Busch is back in wigs and heels to treat New York to one of his smart and snappy campfests, and while this one (set in the late '60's and spoofing Hollywood Gothic melodramas) is a little too loose to snap as tightly as his very best, he's at the height of his dizzying powers as a performer. Every cross of his leg and tilt of his head is an orgasm of kitsch pleasure, even for those in the audience who don't recognize Busch's style as a dead-on exaggeration of the feminine signifiers from vintage Hollywood melodramas. In this one, as a faded femme fatale and washed-up chanteuse who plots to murder her louse of a movie producer husband, Busch gives himself plenty of scenery to chew. Some of his supporting castmates do a bit too much chomping of their own, but it hardly matters in the end: Die Mommie Die! is still one of the funnest nights out you can have at the theatre right now.