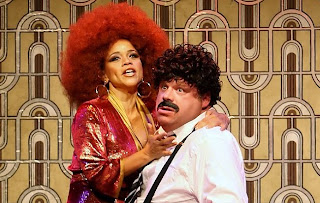 There are towel-clad hotties prowling the three-tiered cherry red bathhouse for sex, but we only get to glimpse them: the gay men we spend time with in Terrence McNally's The Ritz are sexless cartoons, strategically safe for the straight audiences of yesteryear. This comedy probably provided a whiff of naughtiness when it premiered over thirty years ago, before the AIDS pandemic shut down the city's bathhouses and before Generation XXX absorbed gays into mainstream culture. Now, minus any kind of dirty kick, it's just a flimsy farce that plays like a bad Abbott and Costello movie: it's busy, but it's rarely funny. Joe Mantello's direction doesn't help; he keeps the doors slamming and the bodies moving but he doesn't guide the actors to the high-stakes performances that are needed to drive a farce. Kevin Chamberlain gets high marks for his fresh take on his character, and Brooks Ashmanskas manages to bring some dignity to the thankless stereotype he's asked to play, but the one performance that completely triumphs is given by Rosie Perez. As Googie, a washed up lounge performer with more determination than talent, Perez is riotously on-target and turns Googie's lousy and overambitious bathhouse act into the highlight of The Ritz.