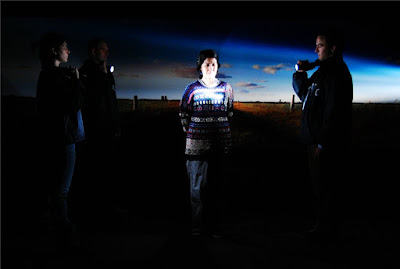 Photo/Rick Berubé
Everything takes time to mature, whether it's a relationship, trust, or even the delineation between an illegal immigrant and a legal one, and that's what Sharyn Rothstein's a Good Farmer manages to show so well (though it's far from an even account of both sides of the immigration controversy). Her play takes time to grow, too, with some awkward and exaggerated patches in the first act that are well-worth sitting through, given the ripe and emotional juiciness of the second. Rothstein uses the domestic situation as a portal into the political one, giving us not generalities, but a specific: Carla Gutierrez (the very passionate Jacqueline Duprey). Rothstein begins by showing us her life in 2007 so that when the play skips back to 2000, we aren't judging Carla on her lack of grammar, but rather on her potential. It's surprising, too, to see Bonnie Johnson (Chelsea Silverman) as a rattled mother, considering how unshakably confident she seems down the road, but defying expectations is a great way to drive a point home.