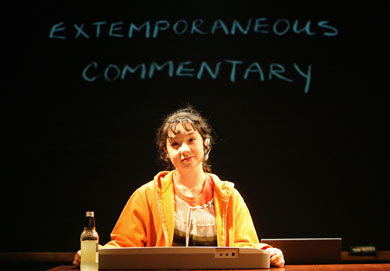 Photo/Joan Marcus
It's not debatable, though you're more than welcome to make a speech in the comments box below: Speech and Debate is the funniest topical drama of the year. Where else can you find the story of a queenie time-traveler accidentally getting Abel killed by outing him alongside the very real dramas of gender identity, sexual molestation, and the psychological damage of being closeted? It's all framed by the different topics of an actual Speech and Debate event, which allows young playwright Stephen Karam to give us extemporaneous thought in a video blog or to use cross examination as a narrative thrust. It also allows an easy transition from light and open-minded to critical and dramatic, something that's very well done by director Jason Moore, who knows a thing or two (from Avenue Q) about indulging quirks while still being truthful. The only thing that rings a bit false is the acting, which is so exaggerated at times by Sarah Steele's eyebrows of Jason Fuchs's face-pulling (he should be in 25th Annual Putnam County Spelling Bee) that it seems a little too self-aware and glib to stay serious. But they're so committed to it, so seriously "hopeless" that even these meta-moments become endearing, and only serve to further connect us (already pretty close, given the intimacy of the Black Box Theater). Some nitpicking seems de rigueur for a show that boldly traverses comedy and drama so well, but I wouldn't want to risk discouraging anyone from seeing this delightful show. This is good, topical theater, done professionally, and ticketed cheaply ($20), so get going!