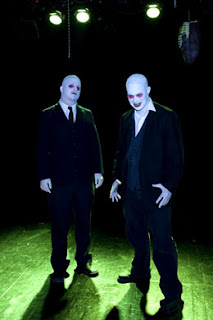 A Halloween goodie-bag of three one-acts and several short vignettes, Pulp is a razor-spiked treat for horror and gore fans. The tastiest bits in the mix - Mac Rogers' Best Served Cold and James Comtois' Listening To Reason - were adapted from 1950's horror comics: thanks in part to smart costuming, resourceful staging, and heightened performances (but mostly thanks to sharp writing) they both achieve the feeling of the era's comic books come to pulpy, blood-soaked life. (They also both feature macabre narration, which goes a long way toward unifying the 90-minute evening's plays with the shorter pieces). The third play, Qui Nguyen's Dead Things Kill Nicely, doesn't recall the era in the same way as the other one-acts, but its Evil Dead-like detour into more baldly comic territory adds another welcome flavor of tainted candy to the assortment. Just about every piece in Pulp - from the wickedly smart vignette that opens the show (in which a metaphor between the relationship of artist to audience and of doctor to patient is illustrated with a most unpleasant "surgery") to the chilling one that closes it (no, I won't say a thing about that one, except that it's not easy to shake off) ends in a splatter-fest. Hard as you try to keep your tongue in your cheek, you'll have a bloody good nightmare anyhow.
Posted by Patrick Lee at 12:59 AM