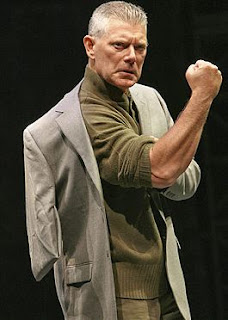 Playing eight soldiers who have been decorated with the Medal Of Honor, Stephen Lang gives the best and most generous kind of bravura performance in this 80 minute docu-monologue play: you may marvel at the actor's characterization skills, as he transforms from one real-life wartime hero to another, but you will leave thinking less about the actor's craft than about the war stories of the men he has brought to life so vividly. Lang is also responsible for adapting the stories (collected in Larry Smith's book of the same name a couple of years ago) for the stage and his writing is no-nonsense and unsentimental: he generally doesn't make the mistake of editorializing or politicizing. The cumulative effect is therefore all the more thought-provoking and emotional, even cathartic, as Lang honors not only the heroic acts of these soldiers but also the humanity.
Posted by Patrick Lee at 8:00 PM