The Return Of The Prodigal 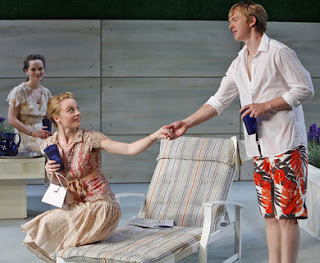 The mission of the Mint is to revive "worthy but neglected" plays and they've this time dug up a particularly lively one, by St. John Hankin, never before seen in New York. An Oscar Wilde-ish comedy that wrings its laughs (and its social observations) out of some of the hypocrisies and class-conscious expectations of Edwardian England, the Mint's production retains the text but re-sets the action in modern times. The result often makes for fun stage business - the layabout, ne'er do well prodigal son of the title wastes his privileged-class time sunbathing in board shorts, one of the daughters entertains guests by playing the guitar, and no one speaks with a British accent, which makes the snooty, voice-of-snobbery character named Lady Faringford seem like something out of Dynasty. But the concept too often hits a wall when the modern-dressed characters behave according to social codes unique to England a hundred years ago. The production is entertaining, but in the end less effective than if it had remained in period, with the audience allowed to find the play's modern relevancy. The members of the ensemble range from very good to exceptional, with the sensational lead performance by Roderick Hill at the very top of the spectrum.
Posted by Patrick Lee at 12:58 AM