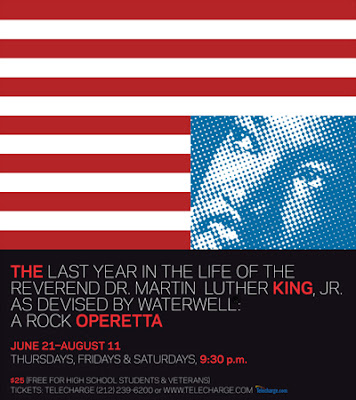 I hope some of you readers are high-school students and/or veterans. Not only would I like to get so diverse a readership, but Waterwell's new half-history/half-vaudeville revue (in a chamber-rock style) is free for you guys. Not that The Last Year In The Life of The Reverend Dr. Martin Luther King, Jr. As Devised By Waterwell A Rock Operetta isn't worth seeing otherwise, but given the shaky amalgamation of technique that I saw at this preview, it would certainly go down smoother on the cheap. I've had great admiration for Waterwell ever since their last show, Marco Million$ made Eugene O'Neill interesting again. And The/King/Operetta is filled with great music and an award-deserving King (Rodney Gardiner); it's just also filled with a few moments of poor acoustics, an odd vocal choice (or perhaps just an illness) for Kevin Townley's portrayal of the cruelly effeminate Hoover, and some awkward interpretive dance. At the same time, King's final year has never seemed so accessible nor as human as when it's presented as a populist opera that pulls upon rock, ragtime, satirical minstrel work (ala Bamboozled), and even sweet little lullabies to get out the story. The show runs through August 11th, so perhaps give them another week to gel their work, but then by all means run to Barrow Street Theater and check 'em out.
Posted by Aaron Riccio at 11:47 PM