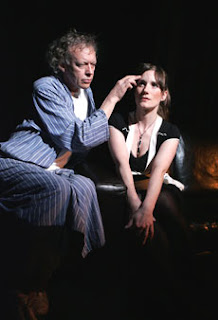 Early in the second act of this debut play by Nina Raine (who also directed) one character likens the phenomenon of memory in the brain to a room full of tuning forks: one vibration sets off another and another. It's only at this point that the bifurcated play reveals its purposefulness - it alternates punchy, lively scenes of a young woman's 29th birthday party with somber flashbacks of her interactions with her father, now deathbed-ridden. At its best the play depicts the chasm between what we display outwardly in a social situation while another secret unspoken story reverberates inside. The scenes at the party - where four of the woman's friends mostly needle each other about sex to hide the anxieties and animosities under the surface - are rendered naturalistically, credibly; Raine clearly has an ear for how these young, middle class people talk and flirt and one-up each other and for what they try to leave unspoken. On the strength of these snappy, sharply observed scenes, the play is worth seeing. The pity is that the flashback scenes, even allowing that they are memories, feel ill-defined and vague and aren't as compelling as the scenes at the party; the idea is better than the execution.
Posted by Patrick Lee at 11:30 PM