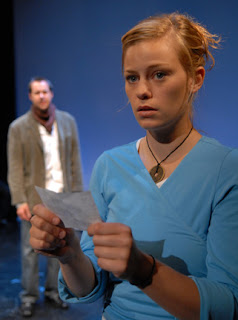 Three one-acts, all written by Anthony Minghella (whose film-directing credits include The Talented Mr. Ripley and The English Patient), comprise the 100 minute Politics of Passion, currently presented by Potamac Theatre Project as part of their first season back in New York. While the tone of the middle piece (a very brief and out of context scene from the film Truly Madly Deeply) doesn't sit well in the show, the longer one-acts that flank it are very good indeed. The evening's opener is Hang Up, a sharp little observation of two lovers whose late-night phone conversation turns from seemingly benign and agreeable to thorny and distrustful: it's directed and performed at just the right pitch to inspire snickers of knowing recognition from the audience. The main attraction is the show's final play, Cigarettes And Chocolate, in which a woman puzzles her friends by ceasing to speak; her continued silence prompts them to reveal far more to her than they would if she would talk with them. The pace could stand to be a bit quicker, but it's a nifty, cleverly written one-act that gives each of the actors a chance to shine. As the woman who chooses to be mute, Cassidy Freeman remarkably creates a full, ever present character almost entirely out of just sitting and listening, and as her husband, James Matthew Ryan is especially vivid conveying shame, frustration, and flashes of anger.
Posted by Patrick Lee at 12:45 AM