No End of Blame 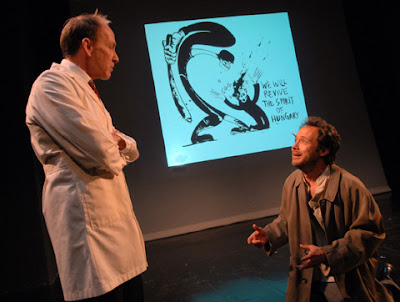 "Art don't hurt, but cartoons do," says Bela Veracek, the stubborn and brilliant political cartoonist who is the center of Howard Barker's excellent No End Of Blame. "I shock the bastards into life." The Potomac Theatre Project is wonderfully versed in the dark satire needed to revive such an epic play, and while it isn't shocking so much as provocative, it's filled with life. The strong ensemble of thirteen has a great range that lets them span sixty of the fictional Veracek's embattled years, not to mention the intricacies of the language, which puts the politeness of words to the test and views the world as the "Castor oil of life." Much recommended, especially for political theater buffs.