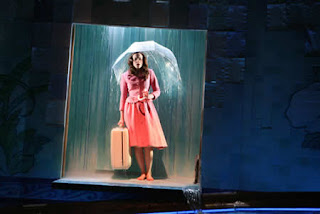 Sarah Ruhl's quirky, boldly inventive reimagining of the enduring Orpheus and Eurydice myth focuses not so much on the story's lovers but on the girl and her father, who reunite in the underworld where only one remembers the other. Ruhl's variation on the story still honors what may be the myth's most powerful truth, that love is both strong enough to conquer death and delicate enough to turn on a single backward glance, and the writing is a fascinating mix of the fantastic and the simple. The play's been given an evocative, visually striking production which carefully balances the play's whimsy and poignancy: there's an appropriate, almost Alice In Wonderland feel to Eurydice's interactions with the Lord of the Underworld when he circles her on his bright red tricycle, and there's an elegant sensuality when Eurydice's father builds a house out of string to shelter her. The play is finally a bit too cutesy-wutesy, and its final plot points momentarily reduce the myth to a simple example of bad timing, but that doesn't seriously diminish the play's freshness and its capacity to seep into the subconscious. Recommended.
Posted by Patrick Lee at 8:00 PM