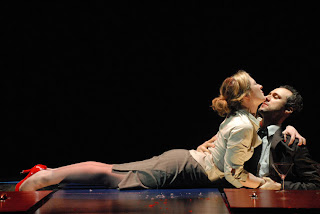 At first the use of language in Jenny Schwartz's play is exciting and bold: the people talk in nearly non-stop cliches and elliptical phrases, and sometimes repeat a sentence or an exchange with minor but meaningful variation. For the first forty five minutes or so, as we watch a married couple struggling with each other over the death of their child, it makes for thrilling theatre: the highly stylized, fractured speech is like the music of profound anguish constructed from the superficial sound bytes of everyday talk. But then other whimsical characters begin to figure into the play - a transvestite airline stewardess and The Tooth Fairy, to name two - and the expressionistic language doesn't have the same impact coming from their mouths. The play begins to seem more style than substance, and all but one of its forays into humor fall flat. (The exception is a punchy pick-up scene between the grieving father and a one-night-stand, played by Annie McNamara) Thirty minutes into this play I couldn't wait to tell all my friends about it. After the full ninety, despite a top-notch production directed with snap and smarts by Anne Kaufman, I crossed all but the freshness seekers off my To Tell list.

The Tooth Fairy and GI Joe character were what held the show back for me, and I agree that the first thirty minutes (and the very end) were the best parts of the show. But that pick-up scene is about twenty minutes long, and comes after the opening, and by that point, I'm so deep into the repeating narrative that I'm hooked. The style is the facade for the substance; the pain is in what the platitudes won't cover.