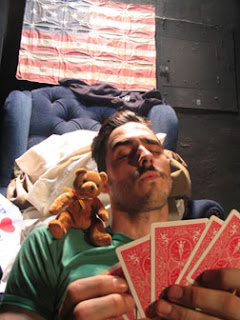 ****
Working Man's Clothes
"It was better before" an Iraq war deserter repeats like a mantra referring to his life prior to going to war in this dark, sick, and mean play that I was very glad I saw. Set in the living room of small apartment of a coupla 20 something slackers, the hyper realistic Penetrator follows the return of an old friend who's more than just a little fucked up over his tour of duty in the Middle East. Definitely NOT for The Pajama Game set, this production's danger was intensified by being staged in the claustrophobic 22nd floor studio space at the American Palace Theater. The actors were pretty phenomenal at creating a very realistic world with a special shout out to Michael Mason (pictured) who has the look and vibe of one of those edgy, relevant indie film celebrities who never stray too far away from the New York stage. After witnessing the scandal that was fuckplays and now the intense Penetrator, I'm picking up that Working Man's Clothes has got enormous balls. I want to suck on those balls.
Posted by David Bell at 3:06 PM