Natascia Diaz: Dance With Me 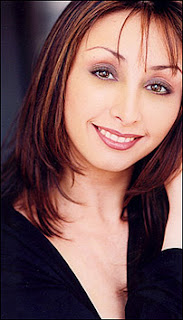 It's not only that Natascia Diaz, who called this concert her "first solo show", is supremely super talented intrepreting a song, although she certainly is: she doesn't "act" the songs as much as she gets inside them and feels them out. It also isn't that she can achieve both a beautiful ringing tone and a tremendous power with her vocal instrument (sometimes, she brings to mind what Elvis Costello once said of Dusty Springfield's voice, "like a beautiful reed sailing over the music", while other times, her full-out declamatory belt reminds in its sheer power of early Linda Ronstadt before the lousy hit records). No, what finally makes Natascia Diaz absolutely kill in concert is that she seems to have unerring judgment for material that works for her and that reaches an audience immediately. In the songs of Michael Pemberton, which comprised all but two or three of the show's setlist, she has found a songwriter whose distinctive music is a perfect fit for her sensational abilities. His songs are terrific and intelligent but not easy to categorize - the lyrics achieve a simple soulful poetry without being flowery, and his music often feels like an amplified hybrid of folk/country and percussive quiet storm ballads - but as Diaz delivered them, one after another, they were all fully realized and instantly emotionally accessible. (And a couple of them rock hard, authentically) The band - a backup singer and six musicians (including the songwriter on guitar) - thinned out to just a few pieces for the evening's sole Jacques Brel... number: a wrenching interpretation of "Ne Me Quitte Pas" that was breathtaking in its emotional directness. This was a spectacular concert that needs to be remembered, reprised and - with any luck - recorded.

where can I see this ?

It was just two shows (at the Zipper) but I have to believe that this concert will happen again in the future.