Saint Joan of the Stockyards 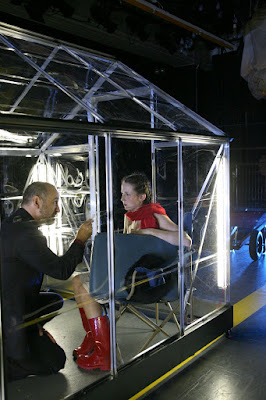 Though Brecht's Saint Joan of the Stockyards is filled with an overfawning look at communism and a deeply satirical stance on religion, Lear deBessonet has managed to take the alienating themes (and style) and ground it in the drama of a martyred innocent, our Jeanne d'Arc, brilliantly played by Kristen Sieh. It's hard at times to see Brecht, as Ralph Manheim's script has punched up the dialogue, and the cast delivers it with a real fervor, but it's not that deBessonet isn't trying to keep us alienated (the stage divides the audience and the props blockage the actors), it's that the avante-garde isn't as shockingly theatrical anymore, especially at PS122, a cultural center. Righteous indignation may be too expensive for the poor, but it doesn't look like deBessonet's team had to compromise for this production, and the polish, mixed with the industrial set, does wonders to bring Joan to life.