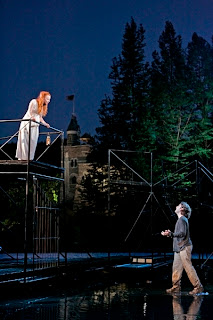 This summer's first Shakespeare In The Park has only been up for a few nights as yet, so there's every reason to believe that the acting will improve during its five-week run. With more time, maybe Lauren Ambrose (as Juliet) will convince that she has fallen under first love's intoxicating spell, and maybe Oscar Isaac (as Romeo) will be able to convey the anguish of losing her. Maybe Austin Pendleton (Friar Laurence) will no longer have trouble with his lines, and maybe Christopher Evan Welch (Mercutio) will settle down and not push so hard. With purposefulness, maybe director Michael Greif can guide all the performances so these actors feel like an ensemble, and with luck, perhaps the set (a metal structure that rotates in a pool of shallow water and makes you think of a giant protractor) won't be noisy and distracting anymore. That's a lot of maybe's.
Posted by Patrick Lee at 12:59 AM

sadly...i agree with your review. lauren ambrose had some good angst-ridden monologues...but did not convince me as a love-struck youth.