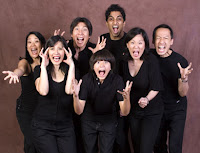 It was pretty super revisiting the score that I used to play on the way to high school in the tape deck in my grandmother's car. All the songs were there and all the notes were hit in this festival production at the Vineyard. Though generally much better at the dramatic moments than the comedic moments, our cast here was filled with personality and seemed like a tight knit family (that's the cast not the characters). Alan Muraoka's direction was actually the star of the production with many numbers and moments given fresh and unique staging that made you go "oh!" or "awww". At the end of Trina's "Holding To The Ground" she sings "Everything will be all..." but doesn't verbalize "...right" after glancing over to Whizzer who is sick in a hospital bed. Just little things like that were special. The fact that the entire cast was Asian? They looked like New York jews to me.
Posted by David Bell at 12:57 AM

I believe that leaving off the last word in Trina's "Holding to the Ground" is in the score - I don't think it's the director's choice. I'm basing that on a college production I stage managed, where we did the same exact thing (leaving off the last word, the glance towards the hospital bed). Then again, it's been a long time since college...

ha! i was waiting for someone to call me on that. i'd never seen that in any prior production so it was new to at least me. but you win. ;)