The Fabulous Life Of A Size Zero 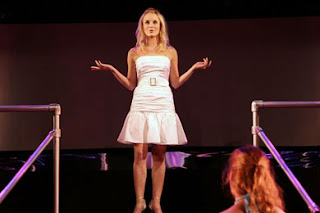 Can a high school student who gets a 2380 on the SAT be as shallow as the one presented here? This disjointed play about drunk self-destructive party girls with eating disorders provided no revelations beyond being that way is like, bad and stuff. The director and cast did their best to keep things light and brisk but they had little to work with in this script that seemed more like an SNL parody than a sincere character study (what it apparently wanted to be according to the final wtf?? scene). If u like totally luv Paris Hilton and think that she like totally shouldn't have gone to jail then this is like totally ur show.
Posted by David Bell at 12:08 AM