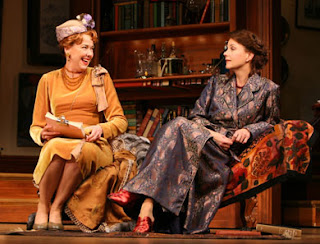 This chestnut, first on Broadway in 1940 and made into a Bette Davis "women's picture" at Warners soon after, has been given a handsome, well-designed revival by the Roundabout. Two actresses I love (Margreat Colin and Harriet Harris) are in high gear as the competing novelists and lifelong friends whose rivalries come to a head when they're not descending staircases, summoning maids, and mxing cocktails in their fabulously roomy Manhattan apartments. Furs, silk gowns, the works. I was licking my chops ready to eat it all up but the play itself, by the author of Bell, Book and Candle, isn't much of a meal. As a catfight it's barely more than a morsel, and beyond that its main message - that valuable lasting friendship requires tolerance - isn't so tasty when only one of the two characters behaves almost intolerably. Colin's character as written is on the bland side, but it's fun to watch her in '40s heroine mode. (Really, when *isn't* it fun to watch her?) Harris gets all the lip-smacking, showy stuff and she goes as far out there as she can short of chomping at the walls. Chomp away, I say.
Posted by Patrick Lee at 8:00 PM