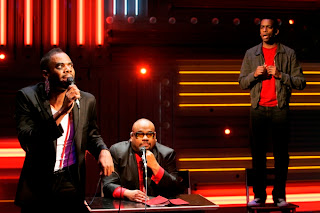 The first time I gave Passing Strange a thumbs-up, I found it wildy exhilarating but frustratingly problematic. But I couldn't shake the thing - it just kept kicking around in my head saying "see me again". Now that I have, I want to say it's the most thematically sophisticated, musically exciting and stylistically inventive musical I have seen in years. Seeing it a second time, already knowing the lay of the land, I could appreciate another layer of the first act that I couldn't before - namely, the dynamic between the narrator and the main character, his younger self. (The show lets you come at your own speed to the connection between the two, but the show is far richer if you know it right at the get-go. Spoiler babies: just trust me on this) I initially had problems with the second act (the second half of it, specifically: the first half, in which our hero makes a hit on the 80's performance art scene in Berlin by exploiting his race, is flawless) but even those concerns disappeared when I realized that what I had interpreted initially as sentimental was actually quite dark and strange. The show's boldy ambitious blend of concert and music theatre creates many unique, exciting moments that open the door to a new way that musicals might be constructed - how often does something come along that is genuinely so ground breaking? The score of the largely sung-narrated show runs a gamut from funk to pop to punk spoof but is always authentic and sophisticated, both musically and lyrically. All four of us at Show Showdown are way into this show (hey Christopher - post your review already!) and it closes this weekend, on July 1st. Don't miss it - this is one that people are going to be talking about and referencing a decade from now when ten times the people who've seen it will be claiming they did.