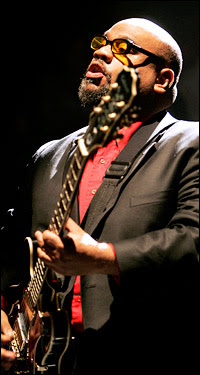 It wasn't until Stew's compelling, forceful, gospel-like rock ballad "It's Alright," late in the first act, that I really woke up and started believing that the music could go right over my head and to my soul. Pretty much my only complaint with Passing Strange is that the first half feels as if it's dumbed itself down with cute lyrics and extra jokes so that the second half comes as more of an epiphany. Note to director Annie Dorsen: don't you dare hold Daniel Breaker back. Between the dancing lights, neon choreography, recessed musicians, and triple-cast actors, Stew sucker-punched me with his late, direct-to-the-audience monologue: the uneven tone just needs a little more work. All said and done? Don't pass this up.