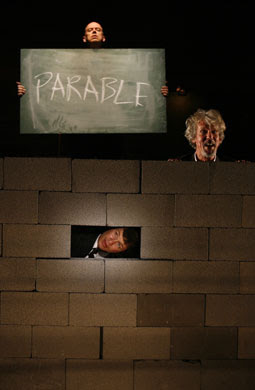 Full disclosure: I, too, am somewhat of an atheist douchebag, but not enough that I can't appreciate the aesthetics of both David Schweizer's panoramic directing and Rinde Eckert's playful, postmodern prose in Horizon. I think the show loses itself in allegory (the main character writes himself into his own Beckett-like play, only to have a Christ-like revelation and resurrection), but saves itself with its performers, who not only have the right questions about faith to ask, but ask them in the right way, too: a capella, vaudeville, or with a energetic dose of accents. It's nice to see David Barlow after he stole the show in the Fringe's Perfect Harmony, but it's even nicer to hear lines like "the nature of truth is to be despised but indispensable" delivered in all seriousness. My only qualm with Horizon is that despite building (and dismantling, and building again) a pulpit, it never really preaches (unless you count the religious sing-song) with enough force to escape all its clever trappings: consequently, I left the theater talking about the images, not the messages.

[Read on] [Also blogged by: David]
Photo/Carol Rosegg
Posted by Aaron Riccio at 12:50 AM