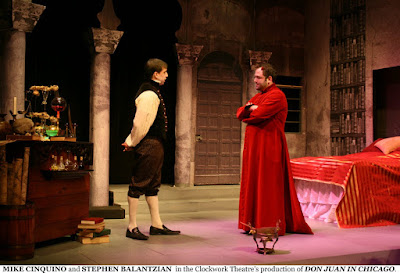 "It's either cum or Kingdom Come," is what the tag-line for David Ives's farcical retelling of the Don Juan story should be. Here, "The Don" is a nerd who sells his soul for immortality, only to find that unless he seduces another woman every night, he'll burn in hell--and end up taking his servant Leporello (the puckish Doug Nyman) with him. Owen M. Smith knows how to direct the comedy, and when I saw it, all the technical cues were on-point, giving the jokes enough freedom to succeed at a pretty speedy pace. From the effeminate Mephistopheles (Stephen Balantzian) to the beleaguered Don (Mike Cinquino), Clockwork Theater's production is charming and efficient.