The Devil on All Sides (Le Diable En Partage) 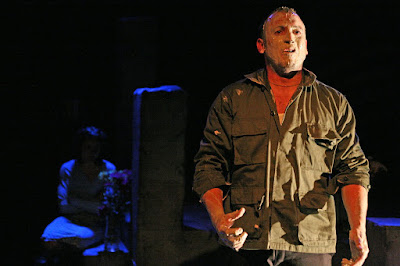 Photo/Rachel Roberts
Slow-paced but sure-footed, The Devil on All Sides is a competent performance piece about war. But competence isn't enough when dealing with poetic dialogue, and for all the salvos of satire, drama, and love, the show remains a quiet, steady affair, and not an explosive bit of entertainment. The mood is there, terse and lurking, but the rest of the play is about as successful as an old-fashioned shelling: some is on target, some wounds you with the shrapnel of afterthought, some just misses, and some pieces seem like they were just written and performed to set up the 'kill shots' late in the second act. It didn't do enough for me, visually or aurally, but I wasn't displeased either. I just expected more, given such good actors.